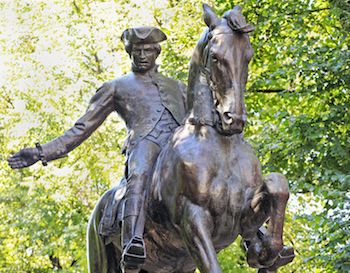 Should America produce its own metal? Paul Revere thought so. Although the patriot is much better known for his midnight ride alerting the Colonial Militia of British attack, he made his livelihood as a metalworker. He cast brass bells for churches, crafted silver jugs for dairy, and fashioned copper lanterns for - well, "One if by land, two if by sea."

After the United States earned its independence, it was necessary for national defense to establish a navy. Ships were wooden at the time and it was thought, and later proven, that cladding hulls with metal would extend the life of vessels and allow faster speeds. Specifically, copper, as it has excellent formability and is resistant to corrosion. Furthermore, the material stretches rather than cracks, and patinas rather than rusts – making copper an excellent choice for seafaring vehicles battling seawater, rocks and cannonballs. The young Congress ordered its first fleet of ships, including the USS Constitution, clad with copper.

Problem is, the English were worldwide suppliers of copper, and our fledgling country was not on the best terms with its former occupier. In 1791, Secretary of the Treasury, Alexander Hamilton, issued “Report on Manufactures” encouraging moderate tariffs to cultivate the American industry. Hamilton wrote: “Though it were true, that the immediate and certain effect of regulations controlling the competition of foreign with domestic fabrics was an increase of price, it is universally true, that the contrary is the ultimate effect with every successful manufacture. In a national view, a temporary enhancement of price must always be well compensated by a permanent reduction of it.”

"I have come to a resolution myself as I hope every good citizen will, never again to purchase any article of foreign manufacture which can be had of American make, be the difference of price what it may." --Thomas Jefferson

Revere sent his son to work undercover at a mill in England, then used his knowledge of metallurgy and his public support to open the first copper mill in North America. In turn, he won the contract to provide cladding for the navy. The USS Constitution, launched in 1797, earned her nickname “Old Ironsides” after a heroic battle against the United Kingdom. The moniker refers to the metal on the hull, which has been replaced a dozen times since. The USS Constitution is still afloat today.

Revere Copper is still rolling strong. Stevenson Company used Revere as our exclusive supplier when replacing the roofing at Kansas Statehouse, a project encompassing eight years and tons of copper. We will support U.S. business at every opportunity.