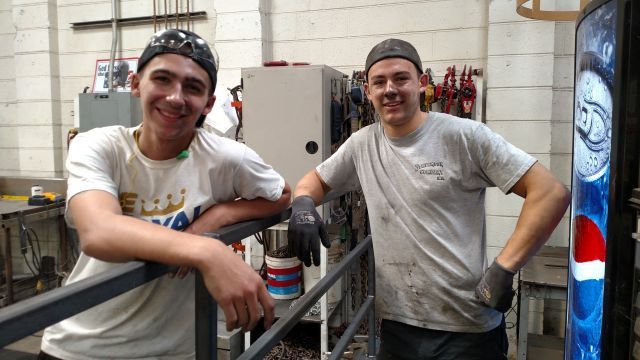 We received a call recently from someone wanting to thank Austin and Andrew at Stevenson Company.  Miss Nicky said she was visiting North Topeka last month and had just gotten off the city bus, headed to the store for a cold pop.  Along the way, she was overcome by the sweltering summer heat.

She says she “has diabetes really bad,” which puts her at an elevated risk for heat related illnesses. When blood sugar levels are too high, sufferers are passing too much liquid through their systems. Certain anti-diabetic medications, such as the commonly prescribed metformin, increase the risk of dehydration. Add sweating to the mix, and you have a recipe for rapid fluid loss.  By the time she was passing by our shop, she was suffering from heat stress.

“I started getting dizzy,” she said, “I was walking around in circles. Those guys saw me and sat me down in front of the fan. My head was spinning. Austin brought me a water and then another water. I must have drank twenty cups. Andrew asked if I needed an ambulance.”

Austin Robberson and Andrew Kramer are apprentices at Stevenson Company, Inc.  Their alertness led to quick action. Andrew and Austin both put their knowledge into practice, identifying the symptoms and then treating the victim. Austin said, “She was sweating like crazy. She looked dehydrated. She said, ‘It’s okay, I have this soda.’ I told her, ‘That’s not going to hydrate you. You need water.'”

All Stevenson employees participated in heat stress training in June.  The summertime malady was featured in newsletters and toolbox talks (timely meetings about industry-specific topics) throughout the season.  Both gentlemen attended career-specific safety training this year at apprenticeship school. Andrew has additional heat training through the military. He said, “You just don’t sit through that many power-point presentations and do nothing.'”

Miss Nicky said, “When I went to see the doctor, he told me ‘You’d have died if it weren’t for those guys,’” referring to Andrew and Austin. “There are good people in this world.” When asked what message she’d like to give the two apprentices, she said, “Be blessed.”